The Origins of Feijoada - Another Urban Legend is Debunked

Ever since I first started coming to Brazil, I've heard numerous times of the origin of feijoada, Brazil's "National Dish". The details often varied, as did the sources, but the gist was always the same - that feijoada was a meal that had its origins in the food prepared by the slaves in colonial Brazil's mining districts, on its coffee plantations, and in its sugar cane growing regions. The story was that usually the food given to the slaves was restricted to rice and beans, and that when times were good, or to celebrate a holiday, the slaves were given a bit of the least-desirable cuts of pork (skin, snout, ears, feet, belly) to add to their normal diet. The slaves added this animal protein to the beans they usually ate unadorned, and feijoada was born. From there, it was brought into the kitchens of the plantation houses, made more elaborate and elegant, and in the 19th century became urbanized in the restaurants of Rio de Janeiro. From there it was adopted nationally, and attained it's iconic status. 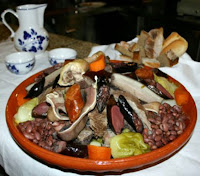 All very romantic, but apparently also all very untrue. Doing some research for these postings about feijoada on Flavors of Brazil, I discovered that what I'd been hearing all this time was basically an urban legend - a very widespread one that is believed by the majority of Brazilians. According to Brazilian culinary historians, such as Carlos Augusto Ditadi, who is a historian at the National Archives in Rio de Janeiro, and Luís da Câmara Cascudo, author of História da Alimentação no Brasil (The History of Food in Brazil), the origins of feijoada are not even Brazilian. Feijoada goes back to the pork and bean stews of Southern Europe, and those of Portugal in particular. It turns out that feijoada and cassoulet are cousins! What these European dishes and feijoada have in common is that they are all ways of cooking the less noble cuts of pork in a thick bean stew. Closer study of the history of feijoada indicates that it is particularly closely related to the stews of the Portuguese regions of Extremadura, Trás-os-Montes and Alto Douro. The major change that resulted in the "Brazilianization" of feijoada was the use of black beans, which are not typical in that part of Europe. Normally the European stews were made with kidney beans, white beans, or chickpeas.

The reality is somewhat less appealing than the myth, in which the scraps of food thrown to slaves was turned by them into the national dish. But reality it appears to be.

I'll shortly be posting recipes for the various dishes that constitute a feijoada. After that it's up to you readers to create your own Brazilian festa at home.
on Friday, March 19, 2010
Share