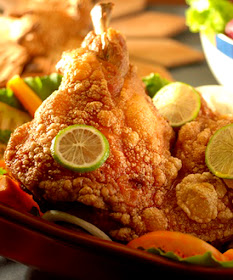 Christmas Day is still eleven days away, but it's rapidly approaching, and even here in the tropical heat of Brazil, people are thinking of Christmas Dinner already and are planning their menus. Because Christmas Dinner in Brazil, just like everywhere else that Christmas is celebrated, is a huge affair usually centered around a large piece of roasted meat, it's fortunate that the meal is traditionally served here around midnight on Christmas Eve. If such a heavy, rich meal were served mid-day, as Christmas Dinner often is in colder climes, it would be difficult to survive. Hot, rich, calorie-laden meats, carbo-heavy side dishes, sweet creamy desserts - it's all too much when the temperature is above 90F (32C). Since Christmas in the Southern Hemisphere falls just after the start of summer, it's one of the hottest times of the year everywhere in Brazil.

But even though the temperature might have cooled to the high 70s Fahrenheit (25C) by midnight, Brazilians still risk heart and health eating  the rich meal that they love to celebrate Christmas. No light supper of cooling salad and a fruit cocktail for most Brazilian, no thank you! Brazilians want a turkey, a ham, a duck or leg of lamb as the centerpiece of their Christmas meal. Let the heat and one's diet be damned.

The most popular centerpiece of a Christmas feast in Brazil is roast turkey, just as it is in many other places. But turkey's not the almost-universal, quasi-obligatory choice that it is in some other cultures. Many families choose another roasted meat for their main course. One such popular choice is suckling pig (leitão in Portuguese). Suckling pig is a time-consuming dish to prepare, but when you've got a lot of people to feed, it's a good choice. In older times, when Brazilian families were larger than they tend to be today, a whole suckling pig often graced the Christmas table. Today, when families are smaller, a whole piglet is too much food even for Christmas Dinner. Brazilians often buy a quarter pig at the butcher shot, or even a smaller piece, such as a shoulder or fresh ham. The important part, though, is to buy a piece with all the fat and skin in place.

Remove the meat from the refrigerator one hour before the time you want to begin to cook it. Preheat the oven to 350F (180C).

Put the pork in a large roasting pan, cover rather tightly with aluminum foil, place in the oven and roast for one and a half hours. Remove the foil and continue to roast the pork, uncovered for another thirty minutes.

During the last thirty minutes of cooking, heat the vegetable oil in a pan, preferably one with a pouring spout. Heat it until it is very hot, but not smoking.

At the end of the thirty minutes, check the roast for doneness (internal temperature should be at least 165F) and when done remove from oven.

Place a wire rack in another large roasting pan, and with carving forks, transfer the pork, skin and fat side up,  to the rack. Check the temperature of the vegetable oil, and reheat it if necessary. It must be very hot. When it's reached the right temperature, pour it over the pork, making sure to cover all the skin. This will cause the skin to expand and become crispy, like pork rinds. Let the roast cool and drain for about 10 minutes, then bring to the table or buffet.


Recipe translated and adapted from uol.com.br.